We continue our look at great artists and directors in the history of music videos, with the complete videography of Bjork... 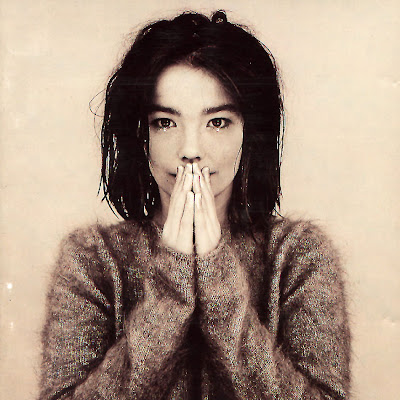 In many ways Bjork is the most logical follow-up to Radiohead in our Depth of Focus series. Her growth as an artist nearly mirrors that of the band's, and as musicians they share some similar stylistic choices. But Bjork's videography, which includes many of the same legendary directors, is also on par with, if not better than what Thom Yorke and crew have put together over the last two decades.

Yet of course there is a distinctive element to these videos which completely separates them from what Radiohead or anyone else has ever done - the unmistakable charm of the Icelandic star herself. If anything, reviewing the following videos will make you fall in love with her all over again.

"Ooops" 808 State feat. Bjork
dir. by Óskar Jónasson
Though the Sugarcubes had some moderate success worldwide, Bjork was in no ways a household name at this point. But her guest appearance made this an MTV-worthy video, although it doesn't have much else going for it. We find the quirky singer here still tweaking the coquettish/crazy image that she would later develop into some better than average acting talent.

"Human Behavior" Debut (1993)
dir. by Michel Gondry
In his Charlie Kaufmann-penned feature debut, Human Nature, Michel Gondry lifts many colors from the palette established here. One of the main characters of the film says of existence, "I've been in jail all my life--a jail of flesh and bones and raging human hormones" - a sentiment that seems right at home with this video. In fact both the music and subject matter seem quintessentially Gondry in retrospect. The fascination with the silly and tragic qualities of "human behavior" are also something that Bjork has dissected throughout her career. Here she is oozing charisma as she wanders through Gondry's nighttime wonderland. Definitely, definitely an early pinnacle in 90's music videos.

"Play Dead" Debut (1993)
dir. by Danny Cannon
This one is hard to interpret since it is so heavily invested in film footage, but needless to say Bjork's voice is front and center throughout - especially after an early zoom-in on her open mouth. I haven't seen this film yet, but the minute I saw Harvey Keitel I was sold on it.

"Venus as a Boy" Debut (1993)
dir. by Sophie Muller
Based loosely around George Bataille's Story of the Eye, director Sophie Muller puts Bjork's sensual lyrics front and center by explicitly drawing out the subject matter. The director utilizes her somewhat trademark soft-lighting and bright colors, while Bjork fondles eggs. The metaphor works fairly well until the frying begins - something about those crackling egg whites just isn't very sexy.

Apparently Muller didn't get a chance to actually read Bataille's controversial classic until after shooting, and thus ignored Bjork's lament that the fried eggs wouldn't gel correctly with the themes. Or to quote her directly, "it's too hard. It's rough and it's greasy, It should be about being sort of liquidy and wet and soft and open..." Err, umm, agreed...

"Big Time Sensuality" Debut (1993)
dir. by Stéphane Sednaoui
What better space for Bjork's other-worldly voice and "big time sensuality" than the big city itself? There are few artists that could keep us entertained for an entire video simply by doing their thing in front of a basically stationary camera, but Bjork continues to make "weird" into something brilliantly seductive. This video must have been a blast to make.

"Violently Happy" Post (1994)
dir. by Jean-Baptiste Mondino
This very 90's video attempts to approximate exactly what the title of the song might look like. The use of scissors, straight-jackets and torn dolls underlines the self-destructive possibilities of love that Bjork addresses in her song. It's entertaining stuff but perhaps a bit too stagnant to be entirely compelling.

"Army of Me" Post (1995)
dir. by Michel Gondry
The genius of Gondry is his Kafka-esque ability to inject the creatively absurd into the everyday. The gorilla continues the themes of man as beast, and the gargantuan SUV imagines the thumping synthesizers of the song as motorized instruments of power.

This "power" that Bjork holds is inside of her, a diamond mine of individuality and voice which the world seems to lack. Even the museums, the last bastion for self-expression, seem decidedly silly and filled with mundane characters. Thus it's that much more important for our heroine to hold onto her increasing power (there's more than one Bjork tackling the dentist) and use it to "fuel" her quest to inspire others.

Army of Me (Animated Version)
dir. by Stéphane Sednaoui
From the director of "Big Time Sensuality," I'm not sure if this is an official release, but it's worth seeing nevertheless. Sednaoui takes the song as a very literal theme for her animated epic, which finds Bjork looking icier than ever and polar bears sneering very sinisterly. I don't think I'll ever look at those Coca-Cola commercials the same way again.

"Isobel" Post (1995)
dir. by Michel Gondry
YouTube does not, by any means, do this monumental video justice. Partially recalling the iconic cinema of Maya Deren, this is perhaps the jewel in Bjork's shimmering collection. Not surprisingly it is also among her densest videos. There are so many memorable shots, but it's the back and forth fading images of two Bjorks moving into each other that stands out most in my mind.

There is a soft texture as well as a horror-film like mood to the entire preceding, which delves into concepts of suppression which are by now commonplace for Bjork. The opening shots of sunlight reflecting off water, which then seep into scenes of Bjork playing piano, are connected with later views of the singer filled with holes of light herself. From these internal beams comes the seed of ingenuity which soon grow airplanes of ideas. One can see the music as a force which illuminates the possibilities of humanity, but there is perhaps something quite dark rolling with the drums under this video. It's something to be pondered, but the constant doubling throughout the work definitely suggests a struggle between inner and outer forces.

The consistent flow between human and natural forces also implies an almost spiritual connection between the two. One particularly interesting composition finds a man/woman (possibly Bjork) fishing in a pond that is filled with a giant Bjork. It's almost as if the character is looking for something which is already inherent within.

"It's Oh So Quiet" Post (1995)
dir. by Spike Jonze
These videos remind us of how truly versatile the range of Bjork's career has been; moving effortlessly between new genres and styles throughout, sometimes even within the same song. Here famed music video auteur Spike Jonze picks up on the big band explosions of the chorus and appropriately finds the basis for an all-out musical number.

The choreography is splendid and the off-kilter delivery of the vocals is mimicked with random objects bursting to life and dancing along to the omniscient music. Jonze finds humor in the cycle of love and heartbreak, and the unforgettable final shot of Bjork floating away seems to suggest a wholly optimistic take on the struggle.

"Hyperballad" Post (1996)
dir. by Michel Gondry
Gondry finds yet another hypnotically beautiful way of representing dreams. This time they are mostly modern lights, TV screens and video games - but fun, chaotic and scary as ever. Bjork's heartfelt admission of fear and dependency is brought to life through a repeated literal shattering of self.

But the heavenly shots of Bjork on clouds is something of an ideal she holds in her head. Even as she wallows in her spell of longing, something inside of her still believes (possibly, maybe) in the existence of a "perfect" relationship - or at least a phone call.

"I Miss You" Post (1997)
dir. by John Kricfalusi
Yeah this is the Ren and Stimpy guy, but as hilariously strange as that show was, it rarely reached the heights of comic prodigality found here. But as with the cartoon and almost all of Bjork's videos, there is more to this than simple gross-out humor.

There is an obvious undercurrent of that same carnal frustration once again, but this is also a somewhat disturbing vision of what our fantasies are like. The images vary between the grotesque and the somewhat childish - playing on the randomness in matters of lust. Overwhelming desire may turn us all into puerile, dangerous and self-destructive beings, but there's also an element of joy in unabashed fantasy.