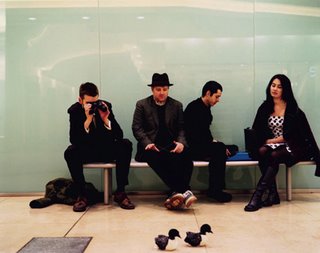 On their debut album, Through the Windowpane, the Guillemots toil in the darkness only to further illuminate the joys of the sun. And in those moments when they soar past Icarus and touch fire - they are a band to behold, reaching heights unheard of in modern pop precisely because of the time spent in the cellars.

Sumptuous strings and subdued melancholic keys punctuate a striking opening for the Guillemots in “Little Bear” where lead singer Fyfe Dangerfield waxes Buckley and declares, “I’m going beneath the stars/I’m going under the soil again/And I won’t be back in a long time.” As he descends into thought the strings grow dark and horrific, the last ten seconds leaving an ominous feeling of anticipation.

But as soon as that feeling settles, a completely new one emerges on track two. “Madeup Lovesong #43” is a deceptively simple ballad, expounding on the simple motivational power of love while breathing through a strange landscape of echoing brit-pop guitars and epic drums. The singer begins in a seeming state of unrequited love, “I love you, I don’t think you care.” But it’s in the final act that Dangerfield lets his guard down, screams like a madman ala Jim James on “Wordless Chorus,” and overcomes his skepticism, “I can’t believe you care!” becomes his triumphant battle cry.

“Trains to Brazil,” like “Made Up Love Song,” has appeared on previous EP’s but it is within this context that it garners its’ true power. Musically it’s the most exciting song of the year this side of “In the Morning” (Junior Boys); combining the jazz impulses of the group with David Byrne yelps and pounding toe-tapping drums - emerging as a thunderbolt of ache, bliss and pure emotion.

Here Dangerfield speaks to his own frustrated impulses, “I wonder why we bother at all,” after he loses a love to “erroneous fools.” Yet further on in the record, on “Blue Would Still Be Blue,” he laments, “I waste so much time thinking about time, I should be out there claiming what’s mine.” Here we are presented with nothing but a stripped keyboard melody to accompany Dangerfield’s high wire vocal acrobatics; we understand the self-doubt at play in the center of this record. The singer himself is in fact one who moans his life “from one day to the next,” but he is also one who celebrates it. It would be naïve to just “live and be thankful,” as Dangerfield himself puts it here. “One day I could die, just like I was born, and the split in the middle is what I’m here for, and I just want to fill it all with joy.”

The album teeters between despair and hope in a painstakingly balanced manner, “shadows on the windowpane” turn into “love coming through my windowpane” from song to song. “We’re Here” wants to imagine the arrival of our trains in brazil on magic carpets and perfect love, but album closer “Sao Paulo” ends crushingly depressed with Dangerfield spiting the world and himself, content to toil in the underground once more – or just leave altogether.

It’s the promise of the world still unseen that continually brings Dangerfield and co. out of this hole, the hope that the light felt in the distance might illuminate something beautiful in their presence or bring some warmth to their bodies. And yet to end on such a somber note is a statement of realism that makes Through the Windowpane so affecting, it offers no solutions but as Dangerfield sings on “We’re Here,” it’s simply an expression of “joy and pain fighting in the corridors.”