In our continuing look at places where film and music collide outside of the music video, we dissect the superb movie trailer for The Pursuit of Happyness...

TRAILER: The Pursuit of Happyness directed by Gabriele Muccino

"You want something, go get it, period."

Scour the message boards at the Internet Movie Database, take a gander at the comments on YouTube, or just search Google for any mention of this first trailer for The Pursuit of Happyness and you are bound to find a number of responses that contain something like the phrase, "this made me cry." This, in itself, is something of a small feat considering the form and inherent intent to advertise of a typical movie trailer prevents even the best from eliciting anything other than slight fear or tension, a few laughs, a smile or, at the very best, a grand amount of interest.

These two and a half minutes of The Pursuit of Happyness go through almost all those stages and emerge with something much more than any other trailer this year. We get a humourous exchange between Will Smith (who most viewers will immediately associate with comedy) and a stock broker, a number of horrifying scenes including one in which Smith is literally hit by a car and few heartwarming moments between father and son. But it isn't just the collective impact of these scenes which has lead so many viewers to such an emotional response, it is in the careful pacing, editing and musical progression that the trailer ultimately succeeds.

This is a trailer that is well aware of the huge star-power of its' leading man, opening with his voice-over, but rather than gaudily promote it or sheepishly ignore it, the popular image of Will Smith is used as an integral tool in the work. The notes of Chantal Kreviazuk's "Time" accompany the initial entrance of Smith dressed in a modest brown suit and showing signs of graying hair, it is quickly clear that he isn't going to be fighting any robots or aliens. But the rising crescendo of the song, the positive tone of the voice-over ("my children where gonna know who their father was"), and the image of a careful street-crossing all imply that our hero is going to be alright.

The crashing drums of "Time" continue as our initial image begins to slowly crumble. We watch as Smith struggles to enter a subway car, gets rejected from jobs and has his car towed away. But it is Smith's uncanny ability to project positivity that gives such pathos to these scenes. The fact that he injects humor into the dire situation of losing his car, and that he does not seem angry towards those who are in better situations than him, is inspiring yet heart-breaking. There is not a hint of self-pity in his failings; instead there is a gradual defeating that seems completely out of his hands. 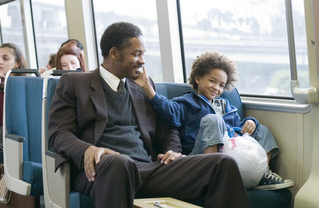 The second song of the trailer is the oft-sampled "Ooh Child" by Five Stairsteps, and it intentionally slows down the mood in order to offer some plot development and background. The shots are thus faded into each other much slower, focusing on Smith's relationship with his son (who happens to be his real-life son, Jaden, as well), attempting to further develop our emotional attachment to the lead character. Perhaps nothing succeeds more than the scene in which Smith stands opposite a neatly dressed business man who is informing him that he won't get paid for an internship he's worked very hard to get, wearing a shabby coat and an undershirt with his hair completely in shambles. He continues to maintain his admirable strength, but in his realization of the lack of money in this opportunity, we sense in his cracking voice the first hint of despair. But it is the reaction shot that we get of the businessman, who gives a sigh of extreme pity, that lets us feel what Smith continues to amazingly avoid.

"Ooh Child" implies that things "are gonna get brighter," and as we see Smith continue to struggle we almost believe it. A successful older man asks him, "you're not quitting on us yet, are you?," but in the subsequent shot we finally see the breakdown. The trailer works because it doesn't show us this Smith immediately; it slowly builds the consistency of Smith's failures, before revealing the ultimate desperation of our fabled movie star. Sitting on the floor of a bathroom on top of papers (which once lived in a briefcase that held the hope of a paying job), one leg holding the door closed and his two arms around his son with tears streaming down his face, it's a beautiful shot and a gorgeous bit of acting on Smith's part. At this climactic moment of the trailer the song appropriately changes to something a bit more somber, the opening notes of Christina Aguilera's "Soar."

But as the title of the song foreshadows, this is not a tune that stays in melancholy very long. Standing against a chain-fence the father tells his son to never give up, and Aguilera begins to let out her formidable voice. The pace of the editing slowly increases as the song builds and Smith regains some hope. There are often shots of him running (including the unforgettable one where he ends up getting hit by a car), and this is a quick and easy way of not only building tension (where is he going?!) but also hope.

The song becomes more prominent as things start to look up. We hear that mesmerizing Aguilera falsetto as Smith solves a Rubics cube, smiles with his son over a meal, and walks defiantly up a downwardly slanted sidewalk. This, in fact, rather than the breakdown of our star, is when our emotions are at their highest. While the tears of Smith shock and hit at our hearts, it is the fact that he is yet able to overcome everything that is most affecting. His amiable character and ability to stay above the internal destruction of hopelessness, is so admirable and inspirational, that even to see it for two minutes is overwhelming. There are other trailers that will make you cry out of sadness or despair, but it is so very rare to come across such a short piece of work that can make you tear in both sadness and joy. In that way this is a complete work on its own, and while it still leaves much interest for the feature film (foremost of which may be the alternate spelling of happiness), it should be applauded regardless of how the eventual movie turns out.
at 6:53 AM