No Man (or Woman) Is An Island

VIDEO OF THE WEEK

One of our favorite videos of the past year, director John Hardwick finds an amusing and poignant way of depicting the emotional distance between people today and our collective fear of sincerity...

VIDEO: "Leave Before the Lights Come On" directed by John Hardwick

"With great power comes great responsibility" is the calling card of Peter Parker, but it's a sentiment that fits rather snuggly within the themes of this Arctic Monkeys video.

On the one hand we could completely blame this desperate women, who has found a rather disturbing (and morbidly comical) way of getting attention and seeking love, for using the sincerity of people in order to fill her own emotional void. And yet one can't help but feel a little annoyed at our male protagonist as well, who seems smugly satisfied with himself after saving a life, but is quick to avoid the consequences of his actions.

As he walks down the street he's got a steely gaze in his eyes (played by Paddy Constantine), and it's a look of fierce determination and distance. But his almost immediate response to the falling shoe reveals that deep down he does have a powerful concern for his fellow human beings. His cold demeanor is not born out of spite, but rather a feeling of resentment towards all those who have ignored and hurt him.

He's a very admiral character in that in a moment of extreme crisis he makes a quick, decisive and helpful decision. But his moment of glory does not make him a complete hero, and his inability to overcome a fear of human connection makes him quickly pull away from the girl. Granted she comes on extremely strong, but there is a sense that the man has a bit too much bottled anger.

The woman is ridiculously manipulative and one wonders if anyone could actually pull this sort of stunt in real life, but the fact that she is believably scared and depressed in her faux-suicide attempt reveals that there is a great amount of despair within. Her impulsive desire for any man leads her to deceptive tricks, but she is not entirely out of her mind.

The desperation of the women is almost laughable, but the man's complete rejection of her is also very cold. What type of relationship is one expecting when one saves a suicidal person? The parallel is drawn through the song to a one-night stand, where one party decides to leave "before the lights go on" in order to avoid the intimacy of the morning. In that case the escaping party is looking for a quick fix to their sexual and emotional needs, but are afraid of going any further. In a similar way our protagonist saves the girl and feels the sensation of doing "good," but rejects any further connection once she forcibly reaches out to him.

What we see as a result of this is her sprinting back to her building, beginning another attempt at connection. We're afraid of those that open up so easily because we are not willing to open up ourselves, we are embarrassed by those who speak and act freely because it challenges us to respond in kind - when most of us are ashamed of our own voices. And this isn't a video about suicide, no one in here is actually suicidal (yet), instead it's about the cold distance between people, especially between men and women. 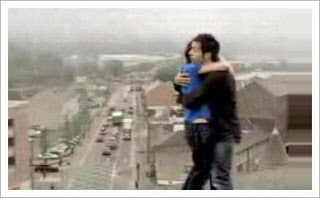 It's disturbing to see how desperately this woman seems to need a man in her life, but one imagines she has been rejected so many times before that she no longer believes herself capable of actually luring someone normally or, more importantly, feeling secure on her own. In the same sense this man is so wrapped up in his own suffering and what is socially "proper" that he is incapable of handling a conversation with a desperate woman.

She is angry that his initial appearance of care seems now to be false, and yet we know (by witnessing his speedy reaction) that it was a pure moment of concern for another human being. At the same time he lashes out against her because she wants to force him to care about her when he feels as if he's incapable of that (and he simply just doesn't want to).

The complication of it is that she will continue to spin horribly in this cycle of self-defeat and despair as long as hard-headed people are afraid of trying to get to know her and find the root of her ills - but those same stubborn people will never attempt to understand her because her desperation and direct call for help will scare them away.

What can we do? It seems that if we where just to trust each other and ourselves a little bit more, we might have less people on the ledge of desperation.
at 6:16 AM