M. Ward "Requiem"
dir. by Santi G. Aguado
Emerging from the dust bowl of the west, 2006's Post-War was a slide show of fairground romances, traveling men and the whispers of some far-off sunlit mountaintop. When critics describe M. Ward's music as classic, it isn't simply in reference to the sounds - Ward paints portraits of characters that would slip easily into the wide-open sky's of American settlers and pioneers.

Yet they are as timeless as they are nostalgic, essentially more about a mentality than any one period in history. With the video for "Requiem" Santi Aguado depicts a man who is the real world match for Ward's world-weary voice. He isn't a prospector moving west, but he's a veteran, and someone who has lived a quiet yet astoundingly beautiful life.

We know it was beautiful because Aguado's cinematography is so damn pretty. The cover of Post-War recalls old photographs and family heirlooms with it's flags of rustic browns and reds, and here it seems that the director used these images as a reference point in building his video. He pieces the disparate parts of the lyrics into a photo of a man looking off into the distance, holding some vast knowledge in the twinkle of his eye.

Beyond all the referencing and musical majesty that Ward displays on record, his greatest skill may be in storytelling - or more specifically - character development. Aguado matches and underlines that ability with a deft directorial touch. We get momentary shots of a number of things like shifting hands, a pair of glasses and a watch. Alone they do little, but as the video builds steam the character comes to life out of the ashes of these objects. Like the sparse literary style of Hemmingway, we don't often think of people in terms of complete images, rather we hold onto a few key ideas from which we can recreate a person on cue in our thoughts. 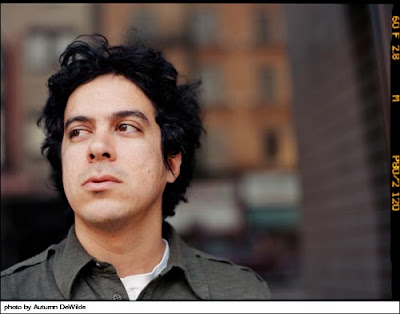 Ward sings "his heart was stronger than a heavy metal bullet," and yet what we see is a rather modest, plain-looking man who seems to wander aimlessly alone. But of course Ward speaks of his heart, and it's when our protagonist belts out a solo on his accordion that we get a glimpse of that passion. But there are other clues as well - a loyal dog, a war medallion and a briefly seen heart-shaped photo locket are all powerful symbols of this man's heavy metal life.

The coolest effect in the video is the laying of pictures, taken within seconds of each other, one on top of another while the camera pans in on them. It not only has the feel of older films and flip-books, but reminds us that photographs and the like have an actual life within them. In remembering someone we can't bring them back, but with the help of a song, some objects, pictures or even just words, we can help others (and ourselves) see a small part of that person and the world he or she lived in.

The dilapidated and uninhabited environment that Ward and the director create for their character emphasizes the limits of memory and imagination. But though we might feel sorrow in reliving thoughts of someone's passing, we gain so much in recalling what has gone - their walk, their smile or even just the way they played the accordion. It's proof that our lives do extend past death, if only in the hands of those who remember us. Ward's passion in singing that climactic line is a recognition of the essential need for this type of remembrance, because so many people on the fringes of society end up living quiet, beautiful yet ultimately forgotten lives.
at 1:00 AM

I think the video captures the essence of Ward's lyrical sensitivity. Where can I find some other work by Aguado?

the director has a youtube channel where you can check out some of his other work: