Speak Up: Director Dougal Wilson on "Don't Let Him Waste Your Time"

Videology recently gave us the chance to discuss the absurd brilliance of "Don't Let Him Waste Your Time," one of our favorite videos of the year, with its talented director Dougal Wilson...

Jarvis Cocker "Don't Let Him Waste Your Time"
dir. by Dougal Wilson
The quality of Wilson's vision is rooted in his ability to capture the appeal of Cocker's songwriting while maintaining his own fresh perspective. From the subtle humorous touch to the extravagant disco finale, Wilson creates a fun ride that matches the song in wit and replay value.

How much of the concept behind the video was influenced by the song itself?

Wilson: Well the song seems to be Jarvis giving advice to womankind, it’s kind of like his philosophy on how women should be treated, and I thought it was an interesting thing... So i made up situations where that might happen - like maybe he could be a psychiatrist or a grandmother or something - but I decided that would be weird. London taxi drivers however are known to be rather talkative, and I thought it would be amusing if he were a cabbie spouting his advice whether or not people wanted to hear it.

What was the idea behind the people being nearly run over?

Wilson: In the Naked Gun movies there was a scene inside of a car where they started driving through stupid places and people jump out of the way, so I thought it would be even more funny for Jarvis, who is a really dry and witty guy, to be this absent-minded driver singing over his shoulder without paying attention to the road.

We didn’t have a lot of money, so I rounded up a lot of my friends... The taxi was really just a HD camera tied to this contraption. It was kind of like a rickshaw with really bright lights on it. 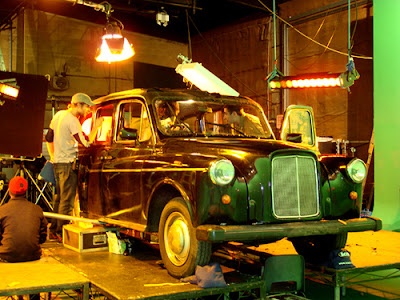 How did you meld these shots with the eventual perspective from inside of the car?

Wilson: We obviously couldn’t put Jarvis in a real car so we had to shoot the outside of the car separately and then work out the rest very precisely. So we had Jarvis in the studio in a little taxi we bought and I really wanted to do the scenes in the windows through back projection because I hate green screen, but we couldn’t afford it so we had to use a green screen. I still wanted the sensation of movement within the stationary taxi so we had the car rocking back and forth and lights moving past the windows as we shot.

How was it working with Jarvis Cocker and who choreographed those stellar dance moves at the end?

Wilson: He’s quite a fun chap and I was relying on him to have some of those signature dance moves at the end. I realized one of the iconic things about Jarvis Cocker is the way he moves his body - as in those Pedro Romhanyi videos like Common People - so it seemed a shame for him not to move at all. That gave me the idea to split the taxi open and have the disco ball drop from a string.

Jarvis was very nice and the only thing he wanted or demanded was having a small figurine on the dashboard. It was this Mexican man with bags of rice who symbolizes good luck.

What is it about making music videos that excites or challenges you?

Wilson: I like music and I like being able to contribute to the world of music, especially since my first career of rock star didn’t quite work out... (laughs)

In music videos the budgets are small and it’s difficult sometimes to work things out, so it’d be great to have more money. But the less money you have the more freedom you actually get to do what you want. And I just love being able to put my ideas out there like that. 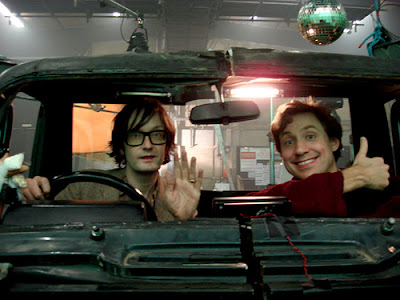 How exactly did you end up doing this for a living?

Wilson: I studied physics at university because I wanted to be an astronomer or an astrophysicist. But I think like a lot of young people I wasn’t entirely sure of what I wanted to do. Once I studied it I didn’t think I was cut out for it.

I was always interested in drawing and making models, and had always been in bands with my mates playing pop music. So then I thought I ought to find something that was more in tune with those things. I initially got a job doing adverts, working as a copy editor at an ad agency, and I realized that there where people who filmed ads for a living – and some of them also did music videos. Mainly I was never aware that I could do that, but then like loads and loads of people I was inspired by Michel Gondry and Spike Jonze. I saw their videos and they really caught my imagination, so I started writing ideas down in my spare time and thinking about characters.

One last question, was anyone actually hurt in the filming of this video?

Wilson: A girl on the pavement fell over and broke her knee, and the guy who looks like he’s run over on his bike was actually nearly run over. With the bright lights and all it was hard to see everything in front. Also we hit a tramp at one point, or this guy hired to play a tramp, and he wasn’t too happy about that. So I guess it was a shoot filled with danger actually... (laughs)

After a number of successful commercials, Dougal Wilson made his music video debut in directing Master H's 'Magic K' in 2001. Since then he's steadily built a reputation for ingenious and highly creative videos, from Chikinki's 'Assassinator 13' to the Streets 'Fit But You Know It.' The later of those won him Best Video of the Year at the Creative and Design Awards in 2005. He also took home Best Director, an award he won the year before as well, and has previously received the Gold and Silver Lion at Cannes.