After All That We've Been Through: Gwen Stefani "4 In the Morning"

A rather mundane Gwen Stefani video, upon closer inspection, becomes an interesting look into the process of pop video making...

Gwen Stefani "4 In the Morning"
dir. by Sophie Muller
In Gwen Stefani's "Cool," Sophie Muller used smooth cinematography, deft editing and her signature soft lightning to create a small romantic epic. It was an avalanche of memory, lust and heartbreak wrapped around a single afternoon teatime. She took a pop gem and filtered it through classic Italian cinema, emerging with one of the best videos of 2005.

It was also a significant moment in the career of both Muller and Stefani, marking the beginning of a partnership that has now lasted through five videos. In ten years or so, when we get ready to do a Depth of Focus on the pop star's career, I imagine "Cool" will be a central point of discussion. Muller had worked with Stefani previously on a number of No Doubt videos, thus she held a longstanding influence in the crafting of the singer's persona. But at the same time the director herself showed signs of creating a style specific to Stefani, which showed itself most beautifully in that video. The mutual impact of the relationship between artist and director is a factor in almost every video made, but it is especially evident with the duo's latest collaboration, "4 In the Morning."

Unlike "Cool," this video features a less immediate narrative, and a song that isn't quite as dreamy. So Muller chooses to open with the charm and beauty of Stefani (of which she has ample amounts), and then challenges the star to hold our attention through the rest. The singer has grown considerably as an actress, and her coquettish smiles and frowns are more subtly delivered here. She oozes sensuality with every soft step, and Muller's two central set pieces - a bed and a bathtub - are clearly meant to ratchet up the sex appeal. 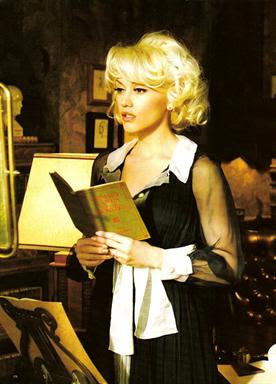 But Muller has more on her mind than arousing her audience, and she makes this evident with two important longer takes. The first occurs with Stefani in bed, glancing at the camera as she sings her opening verse. Rather than cut away after one beat of the song, Muller lingers in the sheets a moment longer. We get to see Stefani prepare for her line, we see the hesitation in her acting, and we are momentarily outside the world of pop video - forced to simply observe the performance and hear the lyrics. Then we plunge right back in with quick cuts and slow motion posing, but just long enough to set us up for the next dramatic scene. Stefani gets the longest take while sitting in her bathtub completely exposed to the world, hair strewn across her face and the emotion of the song built to a climax. She stares at us with those hurt eyes and tries to pull us into the room with her sincerity.

Yet these elements aren't only about exposing the vulnerability of the superstar either. The tension between the foreplay and the emotion is what develops the intimacy between the camera (i.e. the viewer) and the singer. The line, "I'm handin' over everything that I've got," takes on a double meaning. While Stefani sings about an unfulfilled relationship, she looks directly at the screen - it playing the role of both the estranged lover and her private diary. We watch her as she gets out of bed, makes a cup of tea and then indulges in a bath - each detail heightening our feeling of voyeurism and familiarity.

Stefani's constant staring at the camera breaks the wall between fiction and reality, between a narrative and performance video, and makes us constantly aware of the video camera - which automatically becomes a representation of Muller. Thus we are drawn into a dialogue between the director and the artist; we can sense the direction from behind the camera and the intentionality in the acting in front. We are also reminded of past Stefani videos, with her outfits and hairstyles recalling previous collaborations between the two - including "Cool." This actually takes away from the slight story being told in the video, but makes for a far more interesting end product. In the end this work is just as much about Muller's cinematic gaze as it is about Stefani's luxurious image; a meta-Muller video.
at 12:46 PM