The Begining of the End

The spastic rock of the Futureheads becomes the subject of a concentrated look at a certain kind of love, taking the name of the band quite literally in it's vision of the pitfall of idealist notions of marriage...

VIDEO: "Skip to the End" directed by Martin De Thurah

"happy ending, or a broken heart?"

There are in fact very few pop music songs or videos on the subject of marriage. While "love" may be the most popular topic in song, it is rarely spoken of in such blatantly permanent terms as marriage. This institution, and the particular type of life-long union it implies, remains one of the most mysterious, idealistic and well-supported monuments in our culture - filled with lucid imagery and fantastical expectations that carry with them the ultimate dreams of millions of people worldwide.

Martin De Thurah (director of Royskopp's equally gorgeous "What Else Is There?") takes the Futureheads more general fear of relationships and transports it through the visual vocabulary of marriage, presenting familiarities in strange and unsettling ways. The veiled bride, a baby carriage and the wedding night are all present in this psychedelic trip through time, but each symbolizes something slightly different than what they are traditionally associated with.

The two hesitant lovers begin their journey in wide-open fields of barley, but as they move deeper into shadow it's apparent that the snow-capped forest will become a place where ghosts live-on and dreadful fears are realized - far-removed from the rising sun of the initial meadows. The veil that promises innocence is see-through, and cannot hide the realities of the false intimacy of the initial sexual experience. The husband caresses his wife with comically oversized arms, standing yards away from her as her body lays limp and unmoved - the distance between them is emphasized grandly.

And when she closes her eyes to accept his touch her thoughts move elsewhere, to the forthcoming baby carriage and to the myriad of other men who could be standing next to her in her wedding photos. The child promises completeness for the married woman in typical ideology, but De Thurah's baby juts out with the same long grasping arms of the father (perhaps he is still a child as well). Yet she finds herself dancing in joy amidst dreams of her baby and memories of her past (neither of which really involves her husband, instead we are led to believe she is imagining her past lovers or a favorite song here represented by the Futureheads).

The man walks through childlike fantasies of cowboys and Indians, seeing marriage as a battleground in which he will inevitably receive the majority of black eyes, in the process perhaps losing his manhood. Furthermore the children are fearful creatures to him, responsibilities that he may not want. She wants to imagine the two of them growing old together, admiring him as a bitter old man, and yet her fantasy image of him is filled with smoke. And always those floating apparitions. 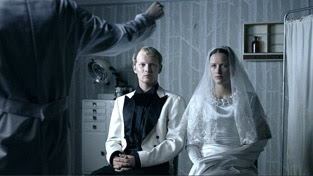 It's one of the best-filmed videos of the year with the cinematographer creating contrasts between ghostly whites and the blinding sun, dying trees and a colorful child. De Thurah uses the eerie image of the starkly white lone bride itself (why is that such a traditionally chilling concept in literature and film?) to further induce a sense of dread, as well as a series of long shots of the Greek chorus-like watchful band dressed in all black, and he switches from the steady shot to the hand-held at exactly the right moment of climactic tension in the narrative.

The dream, though, begins at the absolute end of the relationship - just as the song suggests - at the funeral of the husband. The wife sits still wearing her wedding gown as her husband's body decays into skeletal remains. The funeral is the other iconic image of our culture, and the juxtaposition of the two in our society has always suggested that if one is the end of life than the other, marriage, must be a beginning to a life. But this marriage was over before it began, as are many.

Yet the clue to the entire video rests in the mysterious presence of the photographer in the dreams. He sneaks out from behind a tree, the same trees that hold the children and the passing ghosts, and later he sets up that other photo shoot for the tentative bride. In many ways he is a constant reminder of the beginning, but more forcefully he is a reminder of how things should be. It is his protruding leg that the husband fears first in his dream, and, after all, it is a human hand that turns a lever to move the swirling black hole and dangles the hypnotic swinging pendulum that plummet them into this nightmare initially.

So who is creating these fears in the soon to be married couple? The idealistic notions of what marriage will be, what it is supposed to be, are in their heads but are born outside. In many ways the singers themselves, wishing to see the future, are only dooming themselves and their characters to a false fate. This is precisely the idea behind the song and the video - to constantly fear failure is to already set oneself up for that very failure. But more than that, in continuing to perpetuate the mythic qualities of marriage and ideal union our society implants fear and self-doubt in people. It creates distance between those who might otherwise be close.

The brilliance of the video is that there is no real evidence that this marriage will actually fail - the ghosts are silly white sheets, the children are caricatures and the lovers have 10-foot long arms! - It’s all a false dream of what might be. It's time to take down the fantasy of marriage, because the ultimate painful consequence is not just a sadly unsatisfying life, but it's represented in that final look between the engaged couple - the number of potentially loving relationships aborted simply out of the fear of not living up to an ideal.
at 7:34 AM