It's Just The Way That He Sings

VIDEO OF THE WEEK

The Secret Machines reject the tropes of your typical performance video, instead choosing to focus on the multiple parts and people that come together to create a real night of live music in their video for "Lightning Blue Eyes"...

What is our first character running from as he emerges from shadow to come upon this modest indie-rock concert?

The question of distinct plot is one that this video begs to be asked, and yet one that it clearly has no intention of answering. Taking cues from Gus Van Sant's elliptical style and free-flowing cinematography, director Patrick Daughters successfully creates the feel of your typical indie concert - utilizing the flowing camera to illuminate perspectives from all corners of the experience.

We begin with the random - one who seems to have aimlessly wandered off the street - but quickly move to other equally compelling characters. The slow zoom on the door, with glimpses of the music slipping out each time it is opened, creates a sense of magnetic attraction - as if all that pass by will be sucked into this bar tonight.

A woman enters the place and the camera follows her as she struts towards the bar to confidently order a drink; it's clear that she knows the place well. Contrasted is the woman who sits on a lonely barstool next to her, occasionally glancing up in the direction of other in feeble hopes of attracting her attention. She nervously checks herself in the mirror and makes her way to the actual concert, but not before one last look over her shoulder at the beautiful woman she is leaving behind.

Van Sant mastered this technique of multiple characters interweaving around one central idea in both Elephant and Last Days. The latter was a film that used music and the power of performance as a central theme, though in a very different context here, it resonates in unison with this scene. It is the rock concert that brings together stagehands, managers, fans, band girlfriends, lonely girls and the band itself in dark light of spontaneous performance.

The environment is masterfully created through subtle character development as well as visual cues. Everything from the initial head-nodding static dancing of the indie-nerds to the fairly empty high-school gym venue is spot-on in representing an aspect of this sub-culture. Furthermore the dress code is intentionally controlled in order to differentiate character types, but it never becomes anything less than natural. The woman at the bar walks backstage in her sultry black dress with confidence because she is one of the band member's girlfriend, and the manager remains calm in his t-shirt and jeans in a moment of potential panic precisely because he is an experienced concert manager. 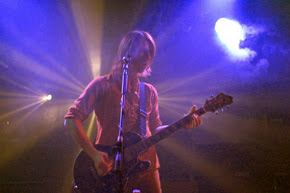 The heart of the piece, though, lies in the literal "lightning blue eyes" of the barstool woman, who seems to hold in her stare the hopes and fears of an entire lifetime of struggle. And when our initial rebel wanderer is involved in a raucous fight that pushes her out of the euphoria of the music, her face turns pale as if everything is in danger of falling apart. One imagines she came here tonight looking for something to eliminate all the pain of her day, maybe even her entire life.

Yet the next scene is a structured mosh-pit, a spinning procession of dancing audience members, and our girl is lost amidst the crowd - she is enveloped in the energy of the live performance. It's a somewhat surreal scene amidst an otherwise strictly realistic video, and it attempts to recreate the sense of uplifting hypnotic energy that often accompanies a great live show.

But it never lasts forever, it's often just one song, and even when you see those really great shows where the band brings it to each and every note they play - it has a definite endpoint like anything else. It's often rather jarring to be at the end of an experience like that; suddenly disconnected from the blood-rush of the music you can literally feel your feet heavy on the ground sometimes. And in this case our longhaired hero is thrown out of the show, back onto the street, left to wander aimlessly once more.

It's a celebration of the moment, and a lamentation of the short-lived duration of these grand feelings. And yet one could not say that live concerts have no real effect on lives, they are more than simply an excursion or escape from reality. As with any artistic experience they can hold deep meaning, but it is a completely separate and unique meaning than your typical interaction with art.

The video deftly underlines this point, reminding us that what is so inspiring about these shows is that the musicians on stage are experiencing the music simultaneously with the audience; the camera moves without cuts from the fans to the guitarist to the manager to the security guard and then back to the fans. The band are not just creators of the music – they are integral consumers of the event as well, like everyone else. This shared collectivity with the melody and the others around you is what can truly affect a person at a live performance.

It is often an indescribable sense of re-birth, something that is weakly represented in words, but more poignantly realized in the image of taking a new wide-open path at a fresh intersection. It doesn’t matter where he came from, but what we know is this brief six-minute encounter with the music, with the melody of the event, is something palpable that will likely effect where he goes next.
at 7:52 AM