Cloud Cult "Chemicals Collide"
dir. by
I have yet to hear the entirety of Cloud Cult's forthcoming, The Meaning of 8, but whenever I see the number 8 my 9th grade math-brain kicks in and wants to define it as infinity. Even in a non-mathematical sense the figure visually presents a loop complete onto itself (like a racetrack). I've always been rather wary of the number for that very reason - it looks a lot like an inescapable trap. But for Cloud Cult the connectivity of that image, the way in which all things contained in the infinite loop are necessarily connected, is what redeems the fear of falling into black holes of despair.

The video begins focusing in on the tattoos of lead guitarist/vocalist Craig Minowa's fingers, while he gently strums his guitar, before transitioning into an array of cosmological images. To anyone familiar with Minowa's past it's not surprising to find the environmental science major/activist surrounding by lots of greens and sunlight. But the themes of this work have far more grandiose aspirations than simply reducing global warming (though it's a definite concern here).

Minowa's lyrics speak to a confusion between what is outside and what is inside the mind, but the floating eye that confronts us early on seems to reference an all-seeing vision that eclipses notions of internal and external reality. Thus the images of kaleidoscopic trees and stars gives way to concert footage where artists paint in concord with musicians - pointing out a unity of humanity, nature and the universe. 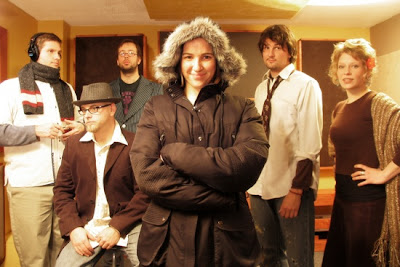 It's fairly obvious that Cloud Cult has the miracle of creation on its mind when the chorus of the song floats in. Yet the video does a good job of adding further layers of complexity to the images crafted in the song. The director juxtaposes the guitar with shooting stars, and the birth of plant life with open doors and windows. The mention of "god" in the song is somewhat prominent, but the religious imagery is fairly light, and in focusing on the chemical and scientific aspects of this miracle the video fights the tendency to become overtly spiritual.

Instead the focus is on the beauty of this endless process. From the bang that creates the universe comes the earth that births humans, and this is a video that finds meaning in continuing that process. But it isn't a simple task of existence, or merely living ones' life in peace that assures the sustenance of the cycle.

In the climactic sequence a door in a forest melts into what could be the tree of life. Above the oak is the piercing sun, and on the grass below it are rays of energy sparkling. Like most of this indie video it's a hokey (and trippy) image that might be at home in a grade school learning video, or on an episode of The Magic School Bus. Yet from a purely scientific standpoint it is the sun that feeds the grass, the tree that grows from that soil, and then humanity that breathes the fresh air of those leaves - standing in the shadow of all space and time. A beautifully infinite entrapment that isn't that scary after all.
at 5:53 AM