Speak Up! The COMRAD's Behind Coparck's "A Good Year for the Robots"

Our exclusive interview with the directing team behind this very good music video...

Coparck "A Good Year for The Robots"
There are many reasons why Coparck's "A Good Year For the Robots" is among our favorite videos of the year. From the art direction to the acting, every aspect of the work is carefully and beautifully executed. In fact, we where so obsessed with the video that we sent the band our Wizard of Oz-themed essay just to get their opinion on the matter.

In return we were given the privilege of discussing the finer points of the project - including the Tin Man, Ricky Gervais and robot love - with the men behind this compelling vision: directors Wouter Stoter and Daniel Bruce, of Holland and South Africa respectively.

Obtusity: The lyrics of the song prominently feature robots, and directly reference Philip K. Dick's novel as well. How much was the band involved in this process and how much of the vision was kicking around the director's head beforehand?

Wouter: First off, about the direction. COMRAD is a collective of about 10 directors who work in The Netherlands. The Coparck video was done by me and Daniel.

We had been talking a long time with Odilo (singer) before this came out. The original plan was to make 12 videos for 12 songs. There are some basic themes on the 3rd album of Coparck that we wanted to show in these clips. For this song we wanted to do something with the idea of the song, robots and love.

Daniel: In the process of this video we had a lot of contact with the band. Every new idea we had, we discussed it immediately with the band. We started out with a more cinematic/ fiction story with a guy falling in love with a robot girl, but then we decided to make it a documentary about a robot that wants love. It's more emotional and fits the bittersweet feeling of the song.

Obtusity: Did you always plan on using dialogue and external sound in the video?

Wouter: When we decided to make it a documentary, we decided it should have people talking about Alex, because we didn't want Alex to talk and still explain something about the story.

Obtusity: Is the reference to the Wizard of Oz (tin man getting a new heart) an intentional move, and if so, what is the relationship of the song, the band and the director to the story of the Tin Man and the others on the yellow brick road?

Wouter: Somewhere after we had started developing the film and were already heavily in the midst of preproduction did we actually realize that we were making the story of the Tin Man. We even wanted to put more subtle emphasis on it with props and dialogue because we liked the analogy and thought that it wouldn't come across enough but, clearly, it did.

Obtusity: One of the most engaging aspects of the video are the philosophical questions it raises. How important is the external expression of emotion to the artists involved? What is it that music and video provide that other forms might not?

Daniel: Expression is the reason we feel alive. Not just because we make movies, but it's in every aspect of life. Music and video are ways to express emotions and create personal worlds of your thoughts. It's a great state of being. 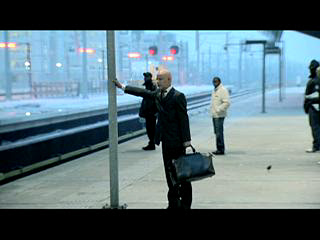 Obtusity: What was the idea behind using a faux-documentary style?

Wouter: The mocumentary style was adopted for a number of reasons. Creatively because the magic of the film lies in the contrast of treating something totally absurd and unrealistic as real and then to let real people/actors comment realistically about that. That’s why the cast is also made up of very normal people. Another reason why we went ahead with the style was budget, we only had enough money to shoot on video and as a rule we thought, if we are going to shoot on video then it too should become a style choice that fits into your concept otherwise you get a cinematically shot film that just doesn't look right because it should have been shot on film. So, most docu's are shot on video so therefore it fit into our concept and style form to do so too. Also, we believed that as a music video it would be relatively original to shoot it rough and documentary-like.

Obtusity: Was anybody a fan of Ricky Gervais' The Office?

Daniel: Who isn't a fan! But when you shoot a documentary style in an office with English actors it's impossible not to refer to the Office. But it was never our initial idea. We, being Dutch, just wanted it to look international and we knew some English actors, so we went for that.

Obtusity: Does the video have a negative or positive view of technological advancement? Or is the use of robots simply a symbolic structure?

Wouter: Positive if we can live with them and they serve us margaritas on demand, and negative if they try to take over the world!

We started out thinking of robots as the replacements of cheap labor. In the future this will be done by robots, who then will get discriminated instead of the immigrants who get it now, and in an even further future they will rebel against humans for treating them so bad. So, in the end they will take revenge for what humanity has done to nature.

Obtusity: What about the actual shooting of the video; what kind of camera was used, who are the actors in the video and where was most of it shot?

Wouter: The shoot was hardcore and, just like its style, it was very documentary-like. We shot the film on XD-CAM, which is pretty much the same quality as a digital-beta camera only a little softer. All the scenes in the office we shot with a Pro 35 adapter, which gives you the opportunity to fit 35mm camera lenses onto it and therefore achieve the same soft depth of field and a slightly more filmic look. Exterior was shot on the same camera but without the adapter and only a zoom lens. For the interviews of all the people, we used a mini DV camera.

Daniel: The shoot was very documentary-like so we shot it over a wide span of time and largely shot from the hip and improvised, crew and actors alike. 2 days in London (exterior) and 2 days in Holland (interior).

The process took forever because we started developing it before we had the green light, then everybody took a break to do other projects and then we came back to it, so I don't know how long, but it seems very long. Actually putting the film together was done in a couple of weeks. Our budget was very low, around 15k.

Obtusity: What kind of direction did you have to give the lead actor, and
how easily did he fit into the role of Alex?

Obtusity: Are there plans of revisiting Alex in a later work? If not, what do you imagine happens to the guy, and what are his chances for successful romance?

Wouter: Nina and Alex survived until Nina got him home that first night and discovered that they had left out certain "bits" and "bobs" during Alex's construction. They broke up and Nina fell in love with Cynthia the Scottish floor manager instead.

Alex is now trying to restore his old memory chip because he now knows what heartache is.

Daniel: We didn't expect that really. We always thought that robots couldn't have heartache because they were programmed to love forever!
at 4:59 AM