Way Down In the Hole: Bone Thugs-N-Harmony feat. Akon "I Tried"

Bone Thugs-N-Harmony ft. Akon "I Tried"
dir. by Rich Newey
Right now I'm watching Season Three of The Wire on DVD, and there's a character who has just been released from prison after 14 years of serving time. Though he's previously been involved in some shady work, he's looking to go clean. Unfortunately there aren't many options for a guy who dropped out of high school to live a life of crime, and eventually, after trying his hand at a few things, he retreats to the drug business. This character made some poor decisions early in his life and he suffered the consequences, but the cycle of "rehabilitation" that our culture has set up seems a bit pointless.

But the story of Bone Thugs-N-Harmony's video is far more depressing than an ex-con who can't find his way back into society. As Akon smoothly puts it in the chorus, this is about those who actually try to pursue something worthwhile from the beginning - but end up stifled by the system nonetheless. Director Rich Newey over-dramatizes an instance of mistaken identity, but he's pursuing a fairly strong point. What is being lamented in this scenario is not simply racial profiling or flat-out racism, but the more troubling assumption of guilt in the mind of the victim himself. It's the fact that he runs, and keeps running despite his innocence, which stings the most. 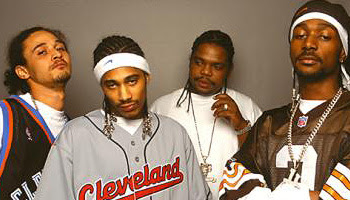 The greatest lesson that The Wire teaches (aside from how to make great television), is the blurry quality of what we typically call "morality," and that uncontrollable elements like environment can have a huge impact on the arc of someone's life. Drug dealers can be educated businessmen, and police officers can be immoral egomaniacs. Growing up around crime and poverty can not only habituate you towards the lifestyle, but can imbue one with a lack of faith in society as well. So when one watches, hears and experiences stories of institutional racism on a regular basis, it's hard not to assume its presence when faced with a similar situation yourself.

Bone Thugs-N-Harmony are reportedly working on a full-length movie with Newey, detailing an imaginary history in which the group never rose out of the streets of Cleveland to become icons of the R&B world in the 90's (source). This video focuses on a similar moment of truth, in which a youngster's life is on the verge of going a very different route. He gets lucky, like the rappers once did, but it's unlikely he will soon forget how close he was to the edge. "I Tried" isn't a perfect work by any measure, but it holds a sense of urgency which makes it a better-than-average attempt at social commentary through music videos.
at 2:23 AM

Rap and Hip-Hop are often overlooked beyond their due when the primary consideration is intellectual or creative thought in music videos. So thank you for taking the time to find and comment on the new Bone Thugs promo. I enjoyed the work and found your critique to be particularly sensitive and well-thought.