No Alarms, Some Surprises

There isn't a new video to discuss today on Obtusity as we are still recovering from a whirlwind weekend in Chicago spent covering the Pitchfork Music Festival. So in the meantime we've posted some photo and video highlights from the 3-day extravaganza - unfortunately not including any Sonic Youth, GZA or Slint photos (our camera crapped out on Friday night). It was the best P4K event yet, featuring everything from a g-stringed Kevin Barnes (Of Montreal) to the legendary Prince Paul arriving unexpectedly on stage with De La Soul. In between there were multiple appearances from members of Grizzly Bear, a bunch of brand new songs from The New Pornographers and a fence-shaking, insanely crowded semi-nude dance party curated by Girl Talk. Like we said - still catching our breath.


Sam Beam returns for an encore after a ho-hum set, unveiling this gorgeous cover of Radiohead's "No Surprises."

Clipse "Grindin" through an electrifying set that featured hits from both LP's and nearly every mixtape the Virginia duo has released thus far.

Though marred by technical difficulties, and only lasting a little over a half-hour, Junior Boys managed one of the more memorable shows of the weekend. They stuck mostly with the new stuff ("In the Morning" sounds even better live), but "Under the Sun," from first album Last Exit, was the real stunner.

Chicago natives Cool Kids had the crowd going wild over their unique blend of indie-style (check Mikey sporting form-fitting acid wash jeans) and hip-hop wit. The new songs sound fantastic, and experiencing "Mikey Rocks" with the crew of rabid hip-hop fans in the front row (including close friends of the rappers) was an unforgettable moment. 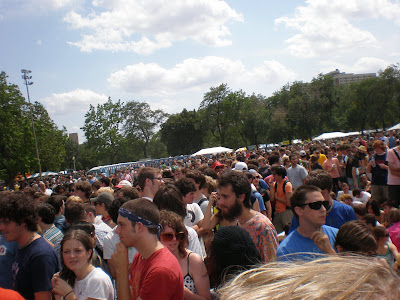 We'll get back to talking about music videos tomorrow, promise!
at 9:04 AM