In kicking off our year-end list we revisit one of the most harrowing and brave productions of the year, Juvenile's "Get Ya Hustle On"...Next Monday we continue our recap with the "Funniest Music Video of 2006"...

VIDEO: “Get Ya Hustle On” directed by Ben Mor

What this monumental video depicts is not the unreal city in the imagination of the poet; it’s a present-day real-life wasteland.

In Killer Mike’s epic tirade “That’s Life,” from his 2006 mixtape I Pledge Allegiance to the Grind, he raps “all the kids got is us” – going on to claim that hip-hop stars where the only major celebrity group to actually come down and help the Katrina victims in New Orleans.

Juvenile wants us to forcefully see what this concept really means. Beginning with high-pitched strings and an angelic porcelain statue, in the next minute it becomes immediately clear that there are no saints marching in the streets of New Orleans.

Instead we see three children, rummaging through the ruins of this forgotten place, finding masks of our government officials faces as toys. School buses are smashed into bridges, horses pull cars along ragged streets and payphones stand disconnected outside crushed homes. The three boys walk down the street as if approaching Oz, but their playground is definitely not lined with gold bricks or emerald castles.

Some of these images may be staged for dramatic effect (most of them aren’t), but that doesn’t lessen the real-world impact that they have. When the kids put on George Bush and Dick Cheney masks they actually become those vicious people, picking apart a dying town, while still representing a commentary on the impoverished upbringing of children in this environment.

As they stand upon the bridge, which we imagine is barely standing amidst what looks like the fall-out of an earthquake, it is especially disturbing to see the smirks on the faces of those paper-faces. They toss what they have gathered from the city over the edge, and with little parachutes on each item the image is perfectly reminiscent of the falling aid packages that the U.S. dropped on Iraq, but failed to ever really utilize in New Orleans.

It’s as if the government has sucked the town dry – in their ultra-capitalist drive for world domination they made millions off this major U.S. coastal city, and yet there was nothing to give back. So faced with empty water bottles and dusty cans, “here is no water but only rock,” what can one do but “get ya hustle on?” 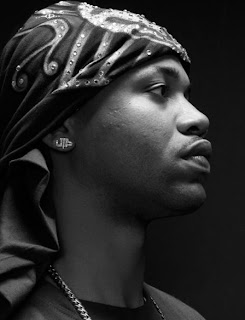 The video is not filmed with a huge budget or with an “artsy” motif; it’s got the look and feel of a rather typical rap video - authentic and gritty. Which in many ways is a reference to the hustle that the rappers themselves are forced into by society. Juvenile is completely aware of the irony of making money off of Katrina himself with this track, and it is precisely this criticism that he is mocking. As the camera spins around a mob of rappers during the middle of the video he almost dares you to claim this is simply a money-grab. But he won’t say it isn’t either, as the chorus suggests, civilization has gone back to the bare minimums of survival of the fittest. The cycle is endless like that, because if the government is hustling the people than the people are pushed into hustling each other; making money anyway they can.

Juvenile talks about the crime and depravity that has taken over the streets of New Orleans, the scramble to sell cocaine and other drugs, but in his criticism he might as well be talking about thousands of other forgotten cities and neighborhoods across America. Yet he never wants your pity, his tone and style prevents that from ever entering the picture. Instead the huge overturned Escalades and limos (apart from literally “overturning” typical hip-hop imagery) are grandly eloquent symbols of destruction that demand help – not pity.

This is the kind of video that contains shots that stay with you far after the conclusion, heightened by the knowledge that this is an actual place that continues to struggle to survive today. Juvenile and Ben Mor made this video way back in December of last year, but not much has changed in New Orleans’ Ninth Ward. What’s more is that there is little hope for mass change in America, at least the kind of change that we need – “If there were water we should stop and drink/Amongst the rock one cannot stop or think.”

In his stirring critique of our entire consumerist and capitalist culture Juvenile not only succeeds in making an unforgettable social statement, but he has created an unparalleled work of art that stands as one of the best music videos of 2006. This is my standing ovation.
at 11:13 AM